Astrologers are starting from the constellation where the sun was during someone's birthday. But they consider the wrong constellation. The next table shows a great difference between the data of the astrologers and the real data:

For instance, someone who is born at 1 july, is according to astrologers a 'Crab'. In reality the sun was in the constellation Twins at his birthday. This shows an important error of the astrology.

The stars are to much away for influencing us. But even in the hypothetical case that the constellation of someone's birthday has to do with his personal future, that cannot be conform to the astrology.
An example: In many newspapers a horoscope is mentioned of people, whose birthdays are between 21 june and 22 july. According to the astrology these people are 'Crabs'. The astrologers give only one kind of prophecy for these people. But according to the astronomy (thus scientific) this concerns people, with the birthday constellations Bull (21 june), Twins (22 june - 20 july) and Crab (21-22 july).
Thus three different kind of predictions should be necessary for these three groups of people. But they are wrongly considered as one group. This shows scientifically the incorrectness of the astrology.

Some astrologers do not base their predictions on the stars, but more on the positions of the planets during a birthday or other special dates. However, there is no reason to expect an influence of the planets on your life. For instance, ebb and flood are caused by the moon and the sun, but not by the planets. So the planets cannot influence your life. But even in the hypothetical case that there is influence of the planets, which of the planets are important? Formerly astrologers used the sun, the moon, Mercury, Venus, Mars, Jupiter and Saturn. But in the last centuries they discovered new planets: Uran in 1781, Neptune in 1846 and Pluto in 1930. And the number of planets is not complete yet. The astronomers expect a tenth planet, which is too dark to see now. So astrologers, who base their predictions on the planets have many problems too.

Other astronomers are occupied in determining someones character or personality. But character descriptions with reference to the moment of ones birth and the relevant position of planets is problematic. Identical twins have an almost identical character. However they are not always born at the same time. Often their moments of birth differ in time. It even occurs that their birth takes place on two different calendar days. Seen from an astronomical viewpoint, such twins should have diferent characters.
With non-identical twins the problem is exactly the opposite. They differ just as much in character and personality as normal brothers and sisters do. But when they are born one after the other, astronomically seen there should be very little reason for them to be different of personality. Character descriptions based on moments of birth and positions of planets is therefore impossible.

The unreliability of predictions of astrologers can also be shown by some examples:
In 1552 the famous astrologer Girolamo Cardan casted the horoscope of the 15 year old king Edward IV of England, who was very sick. He held out great hopes for him, a long and happy life. But the young king died 9 month later.
Johannes Stöffler predicted in 1499 a new flood over the world in february 1524. That mont was very memorable- because of its dryness.

Astrology is in fact a corruption of the meanings of the signs of the Zodiac.
The stars do not have any influence on the life of a men. So, if you want to know important things about your future, study carefully the next picture: 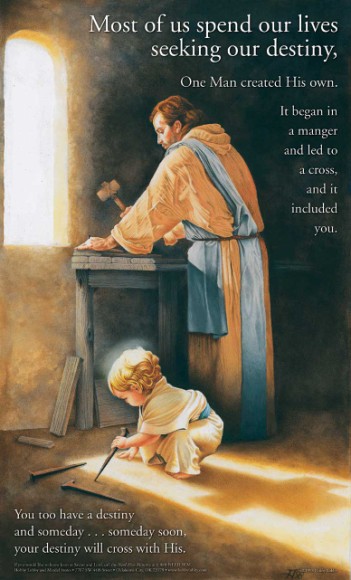 When you meet Him, there are two possibilities: He is your Judge of your sins or He is the Saviour of the judgements of your sins. Accept Jesus as your Saviour before it is too late. If you want to know how, look at the solution.

The result of casting a horoscope is coming under the influence of demons. So never cast your horoscope or let you tell your fortune!